Moving Ahead Development Agency – NPC (MADA) is a non-profit organisation whose mandate is to contribute towards the career, skills, enterprise and social development to disadvantaged communities in the country, an initiator of the Memorial Lecture Against killing of young women.

The main objective of the event is to commemorate the life of Karabo Mokoena and other young women killed in Soweto between April and May 2017, to create awareness on the killing of young women and the aftermaths in the families and society at large. The dialogue aims to urge society especially men to refrain from such atrocities levelled against women and to show empathy to affected family members. We want to invoke active citizenry in curbing the abuse and victimisation of women and children utilising diverse platforms that have high reach and hold social esteem.

We have partnered with Gauteng Social Development and In2it Technologies, among others to host the inaugural memorial lecture against killing of young on the 12 May 2018 at Soweto Theatre.

In recent years, South Africa has seen the scourge of women and children being brutalized and violated, and the perpetrators determined to have been predominantly of the black male population. Although this inhumane treatment of women and children, in that context, can be a symptom of the frustrations and injustice experienced by these disenfranchised men, it is also a foreign concept to the notion of UBUNTU, a trait that is naturally engrained in us.

Key influential figures in society, both in the public and private sectors such as the Men’s Forum, NPA, SAPS, family members of the deceased, Educators, Students and many more will be in attendance.

A high-level view and tone of activities we will embark on, on this event include:
 Question and answers from panelists.
 Exhibition stands from various organizations that fights gender-based violence.
 A high social value event, primarily driven by the creative arts that hold the nation’s attention. This is to ensure that our message reach multiple audiences.
 A robust publicity campaign that stretches across print, broadcast, digital and online with a particular focus on social media.
 MADA has the capacity and expertise to engage successfully on the most popular medium used by youth.
 This project will promote a culture of good morals, early intervention and protection of the vulnerable and fight gender-based violence.
 Invited guests will be requested to each bring a pack of sanitary towels which will be donated to disadvantaged schools and centers for abused women and children.

MOVING AHEAD DEVELOPMENT AGENCY – NPC (MADA)
The memorial lecture against killing of young women and social consciousness initiative aimed at sparking and creating national dialogue on this moral dilemma; we want to invoke active citizenry in curbing the abuse and victimization of women and children utilizing a number of diverse platforms that have high reach and hold social currency.

In this respect, we would like to extend our invitation to cover our event. 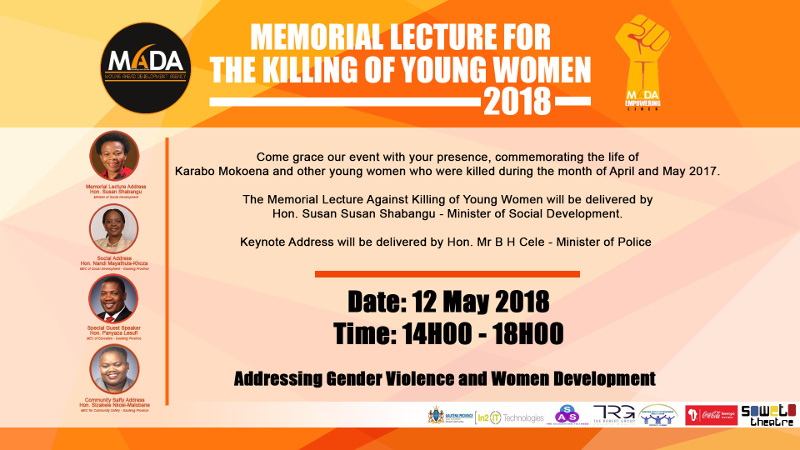