Slow Food Johannesburg will be hosting its third annual Soweto Eat-In at the Soweto Theatre on 5 May. The Eat-In will feature a ‘Flaming Mile’ – pairing 10 chefs with the Soweto Food Network to prepare a dish from a cut of Nguni beef, literally using the whole cow from nose to tail. R100 gets you five dishes from the Mile and a chance to vote for the winning dish. Eight Johannesburg chefs schools have been invited to participate in the ‘Skaftini Challenge’ to create a skaftini that is healthy, tasty, nutritious and uses local produce. Their efforts will be judged by an expert panel, according to strict criteria.In addition to the food contests, Orange Farm and Soweto farmers will be selling their goods alongside exhibitors from all over South Africa selling produce that represents their region –  lake fish from Venda, indigenous foraged foods of the Fynbos region, and cheese and chorizo from Haenertsburg, to name a few.
A Free People’s Conference will be hosted by iZindaba Zokudla alongside the festivities (at no cost to participate) and will feature six conference sessions geared to give urban farmers information on technology, education and financial resources. Speakers include Dr Naude Malan from the University of Johannesburg  (convener of iZindaba Zokudla), Laura Perreira from Stellenbosch University, Loubie Rush from Making KOS, Nondumiso Phaahla from Setsong Teas, and numerous farmers from townships around Johannesburg.

Entry to the event is free. Meal tickets can be bought on the day and there is a fully licensed bar at the venue. The Soweto Theatre plays host to the Soweto Art and Craft Fair every month and the market (live music and all) will continue as normal in concert with the Eat-In.

The Soweto Eat-In is brought to you by Slow Food Johannesburg and iZindaba Zokudla. 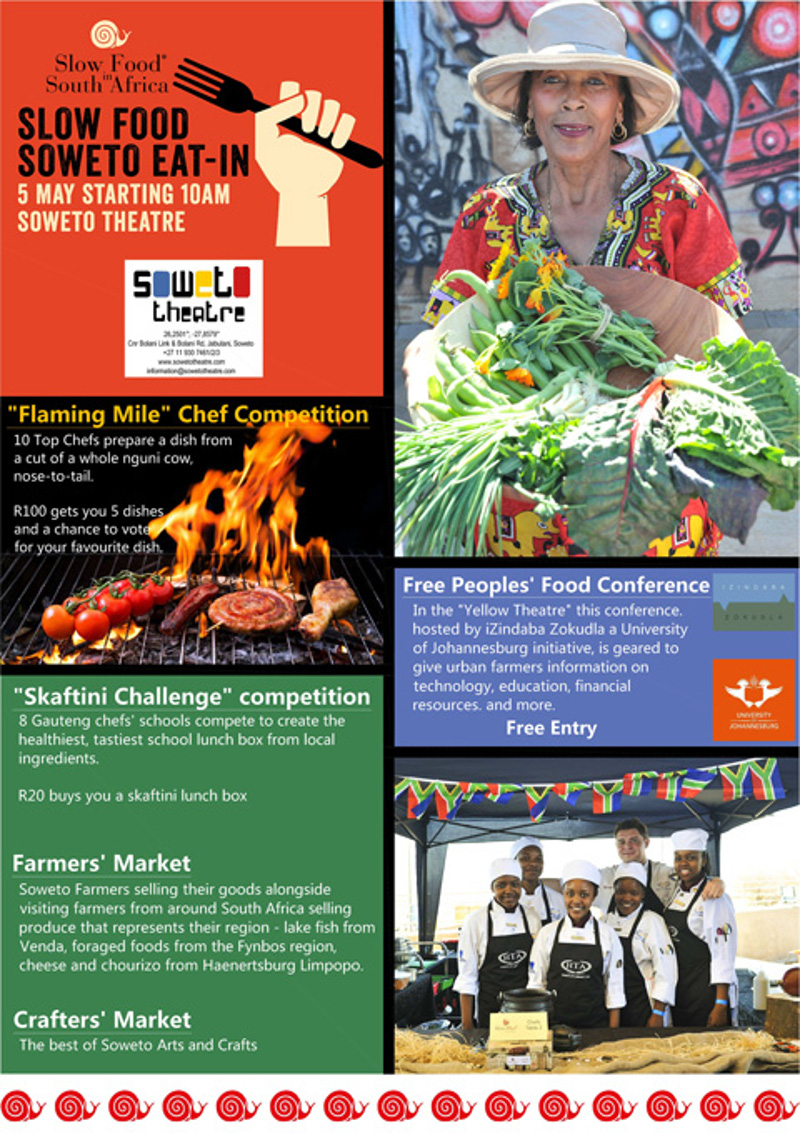